Any intervention directed towards engineering social transformation may be viewed and studied as a phenomenon of social transmission. We suggest in this respect to hypothetically construct it as a system with three referential pairs of parameters corresponding to the analytical distinction of three levels of operation or categories of processes, as follows.

The first and immediate plane of observation is the level of the messages transmitted and circulated among a given group or a whole population, with their content and modes of transmission. This domain of observation is a matter for concepts and theories of communication. Among the questions pertaining to this domain, let us mention a few of them: transfer and/or exchange of knowledge; behavioural patterns of expression; conditions of successful communicative performances; procedures of circulation of information; established systems of communication and their forms of social control; codes, conducts and practices; means of diffusion, forms of exchange, etc.

Yet, the most significant aspect of communication is not to be looked for at this level. It pertains to the form of the social relations specifically set up by the various modes of diffusion and circulation of messages. This becomes obvious as soon as one recognises that a contradiction may more often than not prevails for instance, between the content of the message and the actual effect directly induced at the level of the social relations by its mode of transmission and ways or means of circulation. A particular type of social rapport of communication may indeed build up in the mind representations and bring about in the practice conducts, which prove at variance with the overtly proclaimed semantic content of the messages. One for instance does not learn to behave democratically through passively listening to democratic slogans. Modes and ways of communication are social phenomena. Transmission as a social process originates a rapport.

As a consequence, any attempt of transmission of social knowledge may possibly take the measure of its import only through evaluating the social processes it actually engineers. The criterion of relevance and effectiveness of social transmission for social transformation is the action itself of those it motivates to act upon its messages and the actual impact of the latter: communication is a practical rapport, an element within a system of action. The diffusion of knowledge is only instrumental to obtain as an effect the particular social rapport it seeks to engineer. 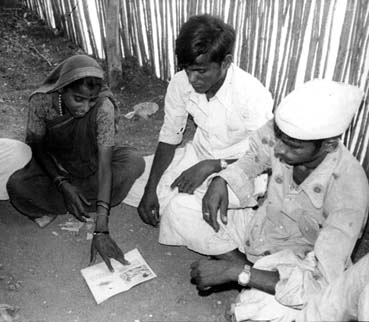 Creation and quest of knowledge are often prompted by a definite will to organise human and social rapports according to a particular system of values. Transmission of knowledge precisely tends to actually set up a system the conception of which pre-exists to its diffusion and definition.

Such is the fact at any level: at the immediate level of every day subjective interaction, with reference to the roles, statuses, codes and ritualised behaviours, and at the global and structural level of the overall systems of communication which mediate and channel all the relations within a given social fabric. For example, the concept of health that one advocates and spreads leads towards particular forms of social rapports and institutions; depending upon the manner, perspectives and aims of their reassertion, traditional knowledges may give legitimacy and strength to modes of socio-cultural domination which enjoy the sanctions of tradition. Knowledge carries with it in-built power and authority frameworks which are either to be established or to be denied.

As a consequence, a given type of social structuring of a community may simply render counter-productive the transmission of some knowledges and the welcoming of specific messages, or at least oppose serious handicaps to their reception and diffusion. Institutional configurations may perturb communication to such an extent as to make it counter-effective or sterile, and significantly alter its import.

With regard to the process of social intervention, the effectiveness and the results of an individual or collective initiative in terms of communication are bound to be significantly affected by the interplay of role and authority networks which obtain on the one hand between the social actor and those concerned by its intervention, and on the other hand among all the latter themselves. The effect that is aimed at does never match the pure message. The nature of the latter can not but be converted, and the modes of its reception can not but be affected by the differential levels of authority which mark out the status of the one who intervenes with regard to the one of those whom he addresses; so do either the particular leadership parameters as well as the methods of action resorted to, modify the message and shape its diffusion; so does happen in particular with regard to research and knowledge, at the level of the relation between the research-worker and a study-group, even though both of them might be cooperatively involved in a self-investigation process.

From the point of view of a critical analysis of processes of social transformation, this concept or specific figure of social communication seems more relevant than the usual set of queries concerning procedures and means of communication. It is also significantly wider than an approach focusing only on the opposition of transfer and exchange of knowledge. These approaches may hide the crucial question which is essentially to be addressed, namely the one of the form and modalities of the social relations of communication and of the aggregate figure that these rapports show in each particular case of social intervention.

The horizon of questions pertaining to communication is to be widened as to cover (measure up to) the whole system of social relations that a particular form of communication originates or reveals. To study that form means therefore to analyse the particular aspects of the social relations of communication that an intervention for social transformation, first, projects by itself on account of its own internal structuring, and, second, tends to inaugurate at the level of the society at large.

A critical analysis ought to deal with the actual rapport of mutual determination prevailing between the three levels that we have distinguished.

One of the main aims of this analysis is to measure the logical or symbolic consistency of the different elements or levels of the figure, or, in other terms, to measure the degree of semantic analogy and practical homogeneity that prevail between the three various forms of processes under consideration.

A merely abstract consciousness and its purely verbal assertion remain a matter of non-productive ideological discourse as long as they do not incorporate concrete forms of human relation and processes of communication, both of them commensurate to the message and its historical intent of social transformation (see Street drama).

In other words, communication can not designate a separate field or subject of methodical investigation as such, per se. Communication processes should necessarily be approached within the whole context of the social fabric in which they take place and with reference to the type of society imposed, expected, denounced or inaugurated by the social actors involved in these processes. Communication may often, unknowingly and wrongly, refer only to powerful tools and stakes in the hand of social actors. It is from the latter's vision, ideology and projects that one should start to apprehend its processes and these processes can be properly appraised only against the background of the power, value, communication and relation systems of the society at large.