Street Theatre:
A direct expression of the people

More and more women in India are becoming victims of murder on grounds of unpaid dowry, or simply thrown out on account of husband's desire for another woman, subject to physical ill-treatment, blows, harassment and rapes. A number of social action groups retaliate in the form of seminars, articles, demonstrations, lectures, meetings, books, tracts, declarations.

Unfortunately, in India, the majority of groups and associations intervene from and in an urban milieu, recruit their activists from educated middle class women, speak a language of liberation of urbanised women which hardly has roots in the culture of common women. Most often, these women once ill treated or deserted remain too isolated and defenceless in front of such practices, except when such urban groups get around in order to intervene on their behalf, take care of and follow their cases before the court, or at least advise them about rights and legal procedures.

Nevertheless, the solutions recommended or implemented often hardly take into account the actual socio-cultural constraints imposed on the common people, nor the traditional forces that control the civil society with more force and authority than the modern laws of the legislators.

Sometimes even the strategies draw inspiration from feminist and economist ideologies which have no impact. Besides, these interventions, their mode of implementation, their conception and the concrete decisions are steps that do not fully incorporate humble women in distress in the handling of their case with full and equal initiative.

In the end ripostes and tactics float above the hard social and cultural realities and are hardly favourable to the emergence of a truly popular mass movement of the concerned women. 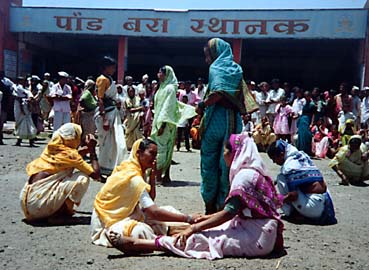 Since 1992 the rural peasant women animators of the GDS (Organisation of the Poor from the Mountain) have presented a street play, all written by themselves. Dialogues, songs, and scenario with no written text expose the basic reasons for the rejection of wives by their husbands -- such as they see and analyse them. The whole direction is their own collective creation.

When this play was staged at Aurangabad in 1994, the audience listened to and followed the play, flabbergasted. Women from the audience were visibly upset by the scenes from life that were presented. Many of them, who had come from areas that were far away from each other in Maharashtra, sang in chorus along with the actresses, the songs of the millstone that the latter had taken up for accompanying and commenting on the scenes that they presented. Why such an impact?

In the interval, when the team of the GDS actors went to a cheap restaurant, 50 metres away from the podium, to have a cup of tea, it took them 40 minutes to cross the distance, so much they were assailed by the spectators. What the latter wanted to say is basically summed up as follows:

You are women like us, poor, peasants, without education. What could you have done to gain so much boldness, climb on a stage, exhibit and play the role yourself, speak as you do, sing traditional songs, show how one dances in circles on festival days? When you sang the opening phrases of the songs of the millstone, we knew them all by heart. We said to ourselves that this is not a play at all; we were not at Aurangabad, but we were at home, in the village, in the slum. We were seeing and living our everyday life again. It is not a play that you are showing, it's the reality.

A number of women in tears were incapable of saying a word; their hands were shaking. They found it necessary to touch each other in order to express and share their emotion, a gesture of reciprocal confession from those with a common destiny.

Let us stress four lessons related to the street theatre in general.

The success emboldened the actresses to such a point that one of the animators-actresses addressed the audience of about twenty thousand persons in the following words, at the end of the meeting after the play, propounding one of its main intent:

The urban educated women keep everything in their control. Peasant women like us, we must remain out of the game. I am not asking, like a beggar, that we should be given the power to decide. In our little GDS groups, we always bring our own problems; we ourselves take our own decisions; we carry them out ourselves. If this manner of working spreads, a real women's movement will exist. Such a movement alone will then succeed in placing the problems in their true perspective, and will correct the paths that are taken to solve them.